It’s quite normal to ride to La Thuile from Bourg Saint Maurice if I’m quite honest. You just take a few lifts from the La Rosiere side and then drop into La Thuile, easy peasy. However, there is another way. One where chairlifts are replaced with a fat chunk of hike-a-bike. Far from civilisation, it’s a proper route in proper mountains, in fact one could call it a proper day out.

The rough plan was to get over a mountain pass (simultaneously crossing the border to Italy), and ride down the other side to La Thuile where we’d catch the chairlift home. That meant we had to be in La Thuile about 4.30 to get the last chair. Without the usual mechanical assistance at the beginning of the day, we’d need an early start. We decided to camp overnight at the start point and hit up a sweet crag for a spot of sport climbing in the sun, before heading back down to where we’d parked the vans to spend the night.

The next morning our friend Stu arrived in his Landrover. We saw him coming but weren’t quick enough to stop him from sailing past the carpark and carrying on up to the Refuge de Ruitor, where the serious adventuring would begin. There’s no phone signal anywhere in the area, and I’d made the error of not being specific about where we’d meet him in the morning. Uh oh! Fortunately he soon came back down and we managed to squeeze 5 bikes in and on the Landy and drove back up to the refuge, saving quite a lot of time and our legs from a fairly steep fireroad climb.

We enjoyed a very nice little flat warm up in the beautiful valley which is home to the refuge, before we embarked upon Hike-a-Bike Part 1: 630m ascent directly to Italy. Leaving the babbling brooks and alpine meadows behind, we got off to a good start, and soon reached a little lake aptly named Lac du Petit (petit meaning small in French). Stu dropped his bike in the lake whilst trying to take a photo. Oh dear! With water gushing out of it, he lifted it onto his back and promptly regretted this hasty move with the ice-cold water now running all down his neck! The next section up to the border took us about another hour, and for some reason I suddenly found it a lot more difficult. I can’t express how glad I was to finally reach the Col du Tachuy! 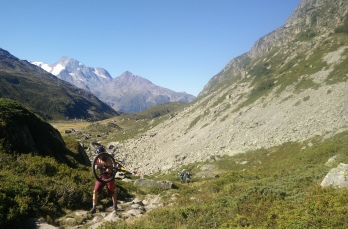 The view awaiting us was nothing short of incredible. A perfect panorama of Mont Blanc and the Grandes Jorasses right there before our very eyes, clouds just brushing the tops. My struggle up to the col was well worth it just for that and I wished I could have stayed and looked at it for a while.

We were high up enough now that the terrain was a bit moonlike, with the trail snaking off into nothing as it dropped off the Italian side of the col. It was obviously going to be rocky and loose, and fingers crossed good fun too.

It was windy and very cold up there, so we quickly got cracking on the descent. It was as expected, and FUN! As usual, I was loving the blind riding, having to make decisions quickly about the best lines and best way to ride them. There were some parts which were so loose you wondered if you were going to slow enough to make the next corner or go tumbling down a load of spiky looking stones and rocks. That would have been ouchy to the max! It’s just as well the trail was so engaging as otherwise it would have been quite easy to be distracted by some very cool scenery too. There was a lake with a rock island in the middle which I thought was the best thing ever, although I might have been the only one!

Off the french map now, it was time to move to the less detailed Italian version. Partway down another techy section I spotted a trail off to the right and had to call a big halt to Gustav and David who were out in front as it seemed like it could be a good option not to lose too much height before climbing back up to Refugio Diffeyes. If you’ve been to La Thuile and looked across at that big glacier with the massive waterfall coming out of the bottom of it, that’s where the refuge is. Right at the bottom of the glacier. This adventure was ticking two boxes – riding a new route from France to Italy AND going to that glacier. Nice!

Here we are then, Hike-a-Bike Part 2. This wasn’t too bad, and we took around an hour to get to the refuge. We did a bit of via ferrata with the bikes, nothing serious but it added to the adventure! Getting up close to the glacier that I’d seen from so far away so many times was really cool as well – no pun intended!

As it was August, it was quite busy at the Refuge. It was also around about 2 o’clock and we were suddenly on a bit of a mission: we only had about 2.5 hours left to catch the chairlift in La Thuile, and we weren’t done with the hike-a-bike yet!

Swiftly refilling camelbaks, we left the refuge behind to find the traversing trail that would eventually become our final descent. A few minutes later, and a quick gander at the map, and we’re heading onto a rocky descending path.

This trail was “undulating” and involved some more via ferrata. Again, nothing very serious (I’d spent a good bit of google time checking out whether it was passable with bikes beforehand), but still tricky with a bike in tow. Forming a human chain along it, we got the bikes passed forward and continued on our way. With a couple more ascents to go, it was Hike-a-Bike Part 3. At this point I clearly hadn’t had enough to eat cos I got hangry about the fact that I was still going up! We plodded on, time ticking down to lift closing time down in La Thuile…

At last we made it to the final high point, checked the map, stuffed our faces with our dwindling food supplies, checked the time and got going. Starting with some cool rocky techy sections, the trail was super-promising. Until we got to an unrideable rocky section that was. Damn. Just as we were really getting into it! We carried bikes though and set off again – all good for a bit and then we got to a little gap between a couple of rocky outcrops, the trail plunging steeply down in front of us. Taking a peek over the edge, it was definitely not something to try riding! Bikes aloft, we descended the steep zigzags on foot until we could hop back on. More rocks. More scrambling. Hmm… What time is it?!?! Ooooh! Crack on!

The trail was really descending now. Traversing across the hillside, pretty much level with the top of the first chairlift in La Thuile. It was pretty mint to be somewhere that I’d looked across at many times, somewhere that I’d just seen a little line on the map. I’d always thought it looked a bit insane from the other side, but here we were, riding along it and it was actually quite alright. Picking up speed, no one wanted to stop now! Eventually we hit a junction and popped out on the trail which was Stage 1 of EWS La Thuile in 2014. Alriiiiiight! This is a sweeeeet trail! We’d kinda dropped two of our friends, although we could hear them wooping their way down so we knew they were good. Time check… It’s getting tighter! We need to go! Still no sign of the others. Let’s go. They’ll figure out it’s downhill surely?! 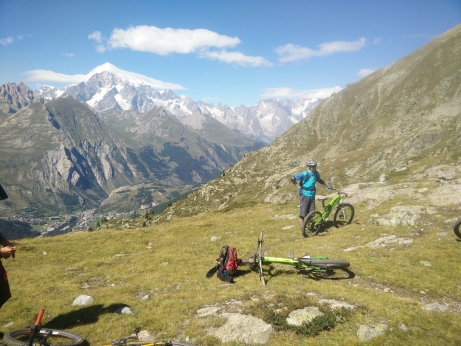 We absolutely smashed down to La Thuile, and practically sprinted to the lift pass office. We had 15 minutes to spare before being stranded in Italy! Phew! We got passes for everyone and with just 5 minutes to spare, the two we’d left behind rolled into town, not even a look of concern on their faces! No wonder they were lagging behind, somewhere along the lines they’d not realised we had a bit of a rush on!!

Literally the last people allowed on the lift, we breathed a collective sigh of relief and started making our way back to France, excitedly chattering about how awesome the final trail was! Close calls, big skids, rocks, loam, it’s a minter. I’ve been lucky enough to ride the EWS stage part of it a few times and it’s always a winner. It’s a shame we didn’t have time for Italian coffee and ice cream at the bottom, but the adventure was complete. The trails we’d ridden and the sights we’d seen more than made up for the lack of Italian delights. Yippee!

Thanks to David and Stu for their pictures.

View all posts by emily

Big blue skies, flowers, bikes! Must be summer!! Fingers crossed travel restrictions are eased cos we wanna ride with you lovely people. Spring is properly here in the Alps and the trails are priiime! 🤞💃🚲
Stoked with this photo of Chris from yesterday's most excellent excursion 🔥👌. Not only is it pin-sharp but he's appropriately dressed for a photo shoot and he was clearly having as much fun as I was guiding the group. What a smile! 👌👌
Hello Les Arcs! Day 1 of this week's guided week in the bag ticking off a few local favourites! 😁
Blasting through flower meadows directly to Italian coffee this time last week👌😍☕️ It definitely wasn't rubbish!
High up on the final descent of last week's Cathedral of Flow trip 👌. It's so long we had to stop for chocolate mousse at the mountain refuge on the way down!
"Sweet dreams are made of this. Who am I to disagree? I traveled the world and the seven seas..."

“What can I say! What an awesome few days we’ve had with Emily as our guide. She has incredible local knowledge and took us on some truly amazing rides…….she’s also seriously fast!! Can’t wait to get back! Thanks Emily.” – Rob Smith, July 2017